The Santa Paolina Farm is a beautiful farm, very large, really family-friendly: to spend a day between games, animals of all kinds and lots of green! 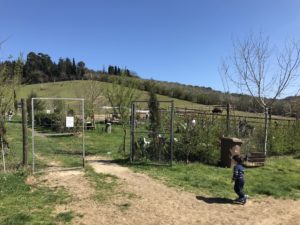 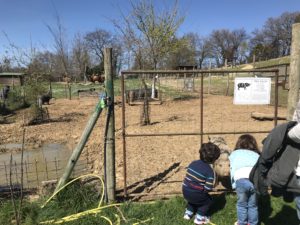 Learn with animal in the farm 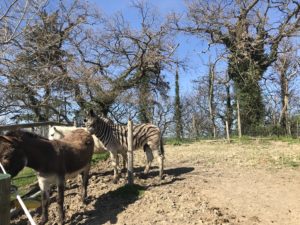 We’ve been at the farm after a short ride to the Fortress of Offagna (available with children!) and we easily reached the farm despite it was a day of celebration and therefore of large turnout of families from all the Marche! At the farm you pay a very modest contribution, but you can take advantage of a thorough guided tour organized by the staff of the farm and all the public space is available for picnics and games for children.

What to see in the farm

The farm takes care of many animals, sometimes adopted elders, or brought here by those owners who could no longer keep them. For us it was a beautiful day, there are bathrooms also equipped with the changing table for younger children: one only suggestion, bring water and snack / picnic lunch, do not forget that you are in the country (there are no bars nearby)!

The deer of Santa Paolina:

Among the first animals to have arrived in Santa Paolina, these deer have been living on the farm for about 20 years. A small herd that is now perfectly set in the Osiman countryside and that regularly reproduces itself on the farm for years. During the visit we recommend that you follow the instructions of the guides so as not to disturb these beautiful animals.

One of the mascots of the farm is Nespola, the goat who believes herself a dog. Born about three years ago, unfortunately, she was abandoned by her mother after a few days so it was necessary to grow her at home. Overcome the first moments of diffidence Nespola immediately set the new experience and spent the first months of life in the heat of the living room playing with humans and especially dogs. This has necessarily influenced the animal’s imprinting process, so much so that even today it responds when called by name and is used to walking on a leash as the most educated of dogs. (from a post by Santa Paolina Farm) 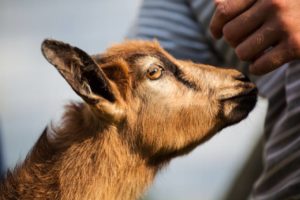 Proud and proud he is ten years old and arrived on the farm in 2016. Born in a zoo he spent his whole life in a Biopark in northern Italy until he was forced to move due to overcrowding and found in Santa Paolina a new house. Contrary to what the dimensions might suggest, it has a calm and peaceful character.
These animals were domesticated in Asia millennia ago and are still bred for wool, milk and as a means of transport. 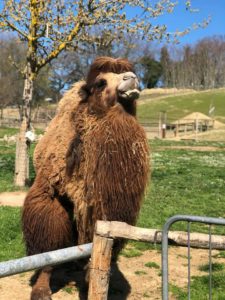 How to reach Santa Paolina Farm:

Santa Paolina, Casenuove di Osimo, turn in Fornace di Morando (Via Molino S. Polo) and take via Ripabianca; after about 2 km you will arrive at the farm.